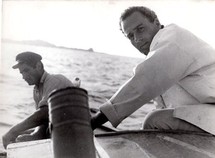 Gastone Novelli was born in 1925 in Vienna to Margherita Mayer von Ketchendorf and Ivan Novelli. In 1943, at the age of just 18, he joined the resistance; he was arrested, imprisoned and tortured. His death sentence was changed to life imprisonment thanks to the intervention of his mother and he was freed when the allied forces entered Rome on June 4,1944. In 1945 he moved to Florence where he graduated in social and political science.

In 1948 he made his first trip to Brazil and began his career as an artist. After returning to Italy in 1950 he held his first solo show at the Teatro Sistina, where he exhibited a series of paintings in an Expressionist style. Enrico Prampolini, founder of the Art Club, was present at the inauguration.

From 1950 to 1954 again in Brazil, he was involved in many diverse activities. After meeting Max Bill and discovering Paul Klee his painting shifted towards geometric abstraction. Novelli also worked with ceramics, developing set designs and teaching. He had solo exhibitions and participated in the first and second São Paulo Biennials.

In 1955 Novelli settled in Rome and quickly connected to the cultural scene of the city thanks to his friendship with Emilio Villa who introduced him to Corrado Cagli. He established afriendship with Achille Perilli, that was to last many years. In this period Novelli experimented with a variety of techniques, such as spraying the canvas with paint, a technique already used by Cagli, and direct photography already practiced in Italy by Luigi Veronesi and Bruno Munari.

In 1956 Corrado Cagli presented the first monograph on Novelli. 1957 was a year of fundamental importance for Novelli: he made many visits to Paris where he met Tristan Tzara, André Masson, Man Ray and Hans Arp; he had a solo show at the La Salita gallery in Rome,where he showed new works with clear influences from art informel; with Achille Perilli he founded the review L'esperienza moderna which had 5 editions before closing in 1959. He met Cy Twombly and after meeting Afro Basaldella, became his assistant at the Liceo Artistico in via Ripetta from 1959. From the 1960s onwards he met and visited Samuel Beckett, Georges Bataille, Pierre Klossowski, and René de Solier and established a close friendship with Claude Simon, Nobel prize-winner for Literature in 1985, who would write one of his last books, Le Jardin des Plantes (1997) inspired by his relationship of profound intellectual and creative exchange with the artist.

Novelli travelled frequently to France, the United States, Greece, and Turkey and held solo exhibitions in Italy and abroad. In the meantime his work began to move beyond art informel, with the appearance of signs and writing in his work. He began collaborating with writers of the Italian Neo-Avantgarde, with whom he shared the same interest in linguistic experimentation. In 1962 he designed and published the Antologia del possibile and in 1964 he was one of the founders of the review Grammatica.
In 1963 he boughta plot of land in Saturnia where he built a house that became a meeting place forfellow writers and artists such as Pietro Consagra, Alfredo Giuliani, Giorgio Manganelli, Gianni Novak, Elio Pagliarani, Toti Scialoja and Giulio Turcato. At the end of the year he participated again in the Biennial of São Paulo in the Italian section, organized by the Venice Biennale. This show resulted in an invitation to the Venice Biennale the following year with his own room. He was nominated by Nello Ponente for the Gollin prize. This was the Biennale in which American art triumphed and at which Novelli made new friends, most importantly Robert Rauschenberg.

In 1965 the Galerie Thomas, Munich and the Alan Gallery, New York hosted solo shows of Novelli's paintings. During his travels to and from New York, Novelli created six works entitled New York Notes which are his own travel notes with references, often ironic, to the American art scene. He created Per una rivoluzione permanente (per Lev Trotsky) which prefigured his later paintings which have clear political motivations, which in the following years would be inspired in turn by the cultural revolution and the struggles for emancipation in the 'South of the world', in tune with the climate of protest.

In 1966 he published Viaggio in Grecia, a volume which includes writings and engravings taken from his notes and drawings, which he collected during his numerous trips to Greece and its islands.

In 1967 Novelli moved to Venice. The La Chaux-de-Fonds museum, the Galerie Semiha Huber in Zurich and the Galerie Espace in Amsterdam all dedicated solo shows to Novelli. Furthermore he featured inimportant group shows such as the Recent Italian Painting and Sculpture show at the Jewish Museum in New York.

In 1968 Novelli was invited to the 34thVenice Biennale and was given an entire room. However, as a protest against the police presence inside the Giardini, he refused to display his works, showing them turned to the wall.

In October of the same year he began teaching at the Brera Accademia di Belle Arti, Milan. He died on December 22, as a result of a post-operative collapse.

Novelli's work has been internationally recognized, as demonstrated by the shows that the most important Italian and American museums have dedicated to him, including the first retrospective in 1972 at the Galleria Civica in Turin, in the same year a show at the Museum of Modern Art in New York celebrating the donation of a Cienfuegos painting; an anthology of his works on paper at the Padiglione di Arte Contemporanea in Milan in 1983, the show at the Galleria Nazionale di Arte Moderna in 1988 and a show at Mart, the Museo di arte moderna e contemporanea di Trento e Rovereto in 1999, and most recent shows at the Arnaldo Pomodoro Foundation in Milan in 2006, at the Guggenheim Collection in Venice in 2011 and at the Museo del Novecento in Milano in 2012.